The Teaching of Contempt for Men in Popular Culture 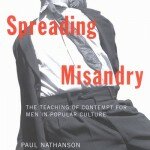 CA $27.95  |  US $24.95
Paul Nathanson and Katherine Young argue that since the 1990s men have been portrayed in popular culture as evil, inadequate, or honorary women, from “Designing Women”, “Home Improvement”, “Oprah”, and “Cape Fear” to Hallmark cards, comic strips, and the “New York Times” columns of Anna Quindlen. The first of a three-part series, “Spreading Misandry” offers an impressive critique of popular culture to identify a phenomenon that is just now being recognized as a serious cultural problem – misandry, the sexist counterpart of misogyny. Nathanson and Young urge us to rethink prevalent assumptions about men that result in profoundly disturbing stereotypes that foster contempt. “Spreading Misandry” breaks new ground by discussing misandry in moral terms rather than purely psychological or sociological ones and by criticizing not only ideological feminism but other ideologies on both the left and the right.
This book is a serious and articulate academic work, a well documented and insightful examination of misandry in our popular cultural expressions. It is surprisingly easy to read for a book of such intellectual and critical caliber. It is the first part of a three-volume set to be called Beyond the Fall of Man. I presume that Man here is meant to mean men, not women, illustrating the authors’ observation that in our current social context the convention that we belong to one species is no longer to be presumed.The larger purpose of the trilogy according to Nathanson and Young is to “help reverse the current polarization of men and women by laying the foundation for a new social contract between the sexes – one that takes seriously the distinctive needs and problems of both sexes. But this is far beyond the scope of this volume.” In the words of authors, the “immediate goal in this [first] book has been the rather modest one of describing a phenomenon or, to be more precise, the link between two phenomena: pop cultural misandry and ideological feminism.”

The authors have focused first on clearly illustrating the spreading of misandry, deliberate or unwitting, throughout much of contemporary popular culture. They support their observations meticulously within a formally structured approach. The first seven chapters are a detailed examination of instances of misandric commercial entertainment productions. The authors take an abundance of examples from the various genres in the visual arts, organize them in groupings according to their differently nuanced misandric themes, and examine each instance in a thorough critical exercise. They go to great lengths to avoid any examples but those that are clearly and unequivocally misandric.

The latter part of the book is an exploration of the implications of the phenomenon they have documented. To explain this relatively recent trend in the cultural idiom of Western societies in general and North America in particular, the authors investigate the relationship between popular cultural expressions of misandry and the historical development of feminist thought and influence, both academic and popular. In doing so, they situate both these phenomena within the context of the practical legacies of postmodern philosophical thought and its offshoots.

Nathanson and Young have succeeded without any doubt in defining the characteristics of the phenomenon that they isolate, and in demonstrating it’s astounding ubiquity. They also go a long way to showing its intimate relationship with the assumptions, uncritical and unconscious or critical and deliberate, of the politically correct views on gender legitimated by the academic world.

One may, and certainly many will, find fault with their views on the pervasiveness of misandry in today’s cultural forms, or on its meaning and importance, but the fault will not be due to any lack of intellectual rigour on the part of the authors. If anything they have been more thorough than should be necessary. Were it not for the contentious reception they could anticipate, such an exhaustive analysis in support of their theses might be considered unnecessary.

This book has shown me how ignorant I was at any conscious level of the rampant misandric sub texts peppering the daily fare we are being served by popular culture. As a man I have become used to a kind of generalized rhetorical misandry in the public discourse over the years, which I credited as the temporary by product of a justified and necessary feminist political movement. I compared it to the somewhat similar anti-white discourses that accompanied black and native militancy in the sixities and seventies, which I also refused to take personally or to consider as more than an impermanent expedient for sympathetic political ends. But if the authors are right, and I believe they are in the light of cumulative personal experience, misandry (and its uncritical acceptance) is not such a relatively innocuous and temporary political event. It is an indication of a far more serious malaise.

Being the rhetorical culprit does become tiring. Any white, middle-aged, north- American, middle-class, etc, male can vouch for it. If one has a strong sense of personal identity, a good sense of perspective, and at least a little sense of humour, it is by no means a truly great burden. But once being the universal culprit becomes by definition fully personal, a fundamentally defining identity, almost an inescapable raison d’être, how can it not be hard to bear, and to what end should it be borne?

I think Nathanson and Young, among other things, have hit upon the subtle fact that to remain enfranchised and politically effective in our society today almost requires becoming a vocal victim. This means victimizers are both in demand and in dwindling supply. Men (imagined in whatever particular variant expedient to the circumstances of the moment) are traditionally handily cast in that role, and today, they are rapidly becoming the only candidates for the job. What happens when, as a group, they too must claim the rights of victims, or simply decide to do so in self-defense, or out of political self-interest? If all victims are equal, and both women and men are victims, equally worthy by definition, where do we look for the unworthy victimizer required by ideological definition? Put another way, as unlikely as it may sound, the growing misandry Nathanson and Young have found in popular culture, if pushed to its logical conclusion within the context of the ideological and philosophical roots they have identified is an indication of a deep and pervasive misanthropy to come. As a philosophical foundation for political life, public human interaction, it bodes ill for the prospects of humanity does it not?

I think the book is an extremely responsible and courageous enterprise, particularly given the prevalent climate in the academic environment the authors inhabit and among the peers with whom they share it. I should like to thank them both for opening my eyes and my mind to the dimensions of a problem to which I have given only scant attention.